This is the second in a series of stories from my recent road trip in South East Queensland. With campervan packed and bikes loaded on the back, we went travelling old roads with new eyes.

After riding the Esk to Fernvale section of the Brisbane Valley Rail Trail (BVRT) on Sunday, we were keen to explore more. This time though, we’d be on our own. And we were. Well… sort of.

Monday brought milder temperatures along with weary bodies and a plan to ride the rail trail from Esk to Toogoolawah, enjoy a pub lunch and ride back again. The return journey would be about 42kms (26mi).

Within a few kilometres of leaving Esk, we were peeling off gloves, jackets and leg warmers. The land was parched. Brown grasses stretched to the horizon. My body loosened up to the jiggle of the rail trail.

By eight kilometres, I’d frozen. But it wasn’t from the cold.

We were happily riding, pausing to take photos, drink water or cross a creek. Then ahead, spread across the trail and over its edges, we saw cattle. Their rich caramel colour striking against the land’s beige grass. As we rolled closer, the herd rearranged itself. I wouldn’t have minded if they were all cows but there were a couple of bulls amongst them. And one bull had rearranged itself sideways across the trail.

At this point I don’t remember breathing. But I do remember stopping. And I do remember saying to Jane, who was encouraging me to keep rolling forward: “I think we have to turn around”. And at some level I was remembering something else.

When I was twelve, I was one of ten country schoolchildren selected to attend the Royal Queensland Show in Brisbane.  Once known as the Brisbane Exhibition, but now affectionately called ‘The Ekka’, this show is an agricultural exhibition held for ten days every August. I travelled by train from Bundaberg to Brisbane, chaperoned by a local schoolteacher, and during that visit to the Ekka, I made a discovery.

I discovered that although I like farm animals, I prefer them if there’s a fence between us.

The other nine kids seemed far more familiar with farm animals than me. We were all children of farmers but I’d lived on a sugar cane farm where our farm animals consisted of a dozen chooks, two ever-breeding cats and a face licking labrador. The closest I’d come to a cow was going with Mum to pick up milk from the neighbour’s dairy. I’d only seen bulls behind fences from afar. And as for horses, there really was only that one night on the Shetland Pony at Bundaberg’s Skyway Drive-In Theatre when I was about four.

When it came to the Grand Parade at the close of the Ekka and the other kids were hoping to hold the lead of some large beast and walk it around the main arena, I was making myself as small as possible. I think someone noticed. They gave me the job of holding a placard bearing the name of the Grand Champion Hereford Bull, while walking in front of this large lumbering blue-ribbon-wearing animal for the entire parade. I couldn’t wait for it to be over.

So back on the Brisbane Valley Rail Trail, I’m frozen with the fear of a farm girl sissy.

It’s not like I ever had a bad experience with cattle. I just don’t have enough experience with them. Do I ring my bell? Do I talk to them? And they’re so BIG. Do I ride fast? Or slow? What do I do if they start running towards me? So I stood astride my bike on the trail like a donkey refusing to budge while Jane coaxed both me and the cattle to move on.

And we did – me and the cattle – move around and forward and past each other.

But of course, that was no cause for me to feel much relief because I knew we had to come back the same way in the afternoon. “Do you think they’ll still be there when we come back again?”

No, they’ll be gone by then, came the nonchalant reply.

But of course they were there. And I knew they would be. But I decided I was going to face this fear. Actually I had no choice but it was still good to feel as if I was in charge of something.

So with firm voices laced with kindness, we called out to the cattle, waved our arms and encouraged them to move. All the while we kept pedalling through and past the herd. I remember breathing this time.

As for the rest of my Esk to Toogoolawah rail trail ride, it was enjoyable. I’ll let the photos and their captions tell you why… (for obvious reasons, there are no photos of cattle 🙂 ). 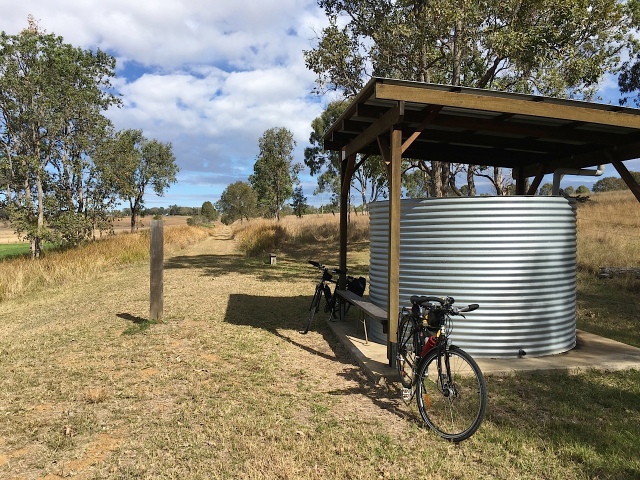 Riding across a livestock grid. 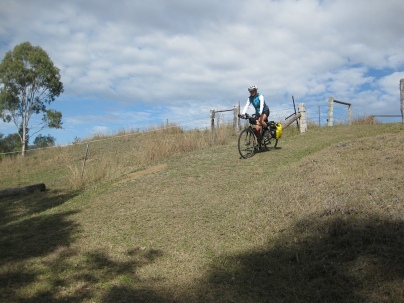 Descending into a creek crossing.

And climbing up out again.

We saw three kangaroos grazing here – a large male and two smaller females. The females squeezed under the barbed wire fence and the male waited, watched us, and then in one bound from a standing start, jumped the fence.

Arriving in Toogoolawah via the Bubble Bridge, designed to celebrate the condensed milk factory that once operated in the town. Now the old factory is the Somerset Regional Art Gallery, named ‘The Condensery’.

18 Comments on “Esk to Toogoolawah BVRT”

And we made it! 100kms phew 😅
From busways to country roads …
Lining up for the start of the Brisbane to Gold Coast … after a train ride up from the coast with hundreds of bicycles … @jane_sandyfeet and I joined 4500 riders for the cycle ride from Brisbane to the Gold Coast.
Clear and sunny 🌞after a week of (much-needed & very-welcome) rain☔️
Bike service day 🔧 Tuned and ready to roll out on Sunday for the Brisbane to Gold Coast Cycle Challenge 🚴🏼‍♀️🚴🏼‍♀️🚴‍♂️🚴🏻Thanks Mark and all the crew from @mikesbikesmiami for keeping our bikes rolling 🙌
Market morning 🥬🥒🫐🫑🍅@currumbincommunitymarkets
It’s arrived! ✅ My Rider ID Kit for the Downer Brisbane to Gold Coast Cycle Challenge turned up in the post today - wristband - bike ID number - Pre-ride charter train info for the trip up to Brisbane. Getting close now 🤩
Time to stretch the Ks in prep for the #b2gc — 3 weeks to go — rode Currumbin to Paradise Point return today 👌😊
Always worth the climb up to Pt. Danger for this view … plus at this time of year the whales are swimming by on their way back to Antartica 🐳
Coffee stop at the Currumbin Eco Village cafe on our way up the valley today ☕️🚲
Bicycles resting 😌
@swellsculpture best seen by bike 🚲