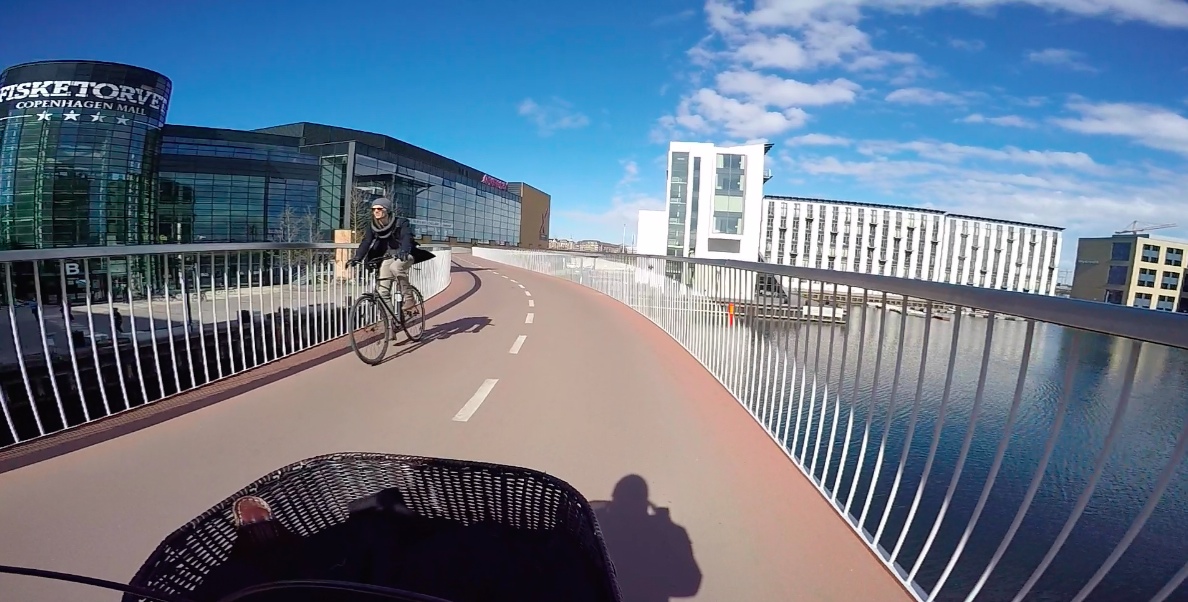 The thought of riding a bicycle in Copenhagen was intoxicating. It had been 72 hours and 15,637 kilometres since I last spun some pedals around and this city is one of the world’s cycling capitals, a role model for bicycle culture and lifestyle. I wanted to experience it first hand. I wanted to see just how good cycling in everyday life can be when people live out their everyday lives on two wheels and when the city’s infrastructure supports that choice with genuine investment. In particular, I wanted to find the Cykelslangen.

Since arriving, I’d been walking and watching and photographing the way bicycles fit into this city; how they move, where they travel, where they park, what type of bikes there are, and who’s riding them. I’d been imagining riding and couldn’t wait for my jet lag to pass.

So, fuelled by a Scandinavian breakfast of rye bread, cold meats, boiled egg, smoked fish, capsicum, cucumber, cheeses, finished with black coffee and a Danish pastry (or two, well maybe three… it was going to be a big day out), I was ready to ride!

Our hotel hire bikes were stored in the basement and after adjusting the seats so our legs have a comfortable stretch on the downward pedal, we selected the lowest of the bike’s three gears and rode up the driveway, waited for the roller door to open and pedalled out into a bicycle lane. Repeating my bicycle mantra…keep to the right, keep to the right.

Throughout Copenhagen, bicycle lanes are common. These are lanes dedicated to bicycles. Cars do not park in the bicycle lanes (as I often encounter on the Gold Coast). Pedestrians do not walk in them. They each have their own lane.

If I don’t have a time limit, I like to amble when I’m riding my bicycle but in Copenhagen, I’d noticed that cyclists travel briskly in the lanes. Everyone keeps moving, no dawdling, because you don’t want to block the lane. This means the bicycle moves people from A to B quickly, more quickly than a car, bus or walking would.

We set off from the hotel with some loose directions for finding the Cykelslangen from the young woman at the hotel reception. Our first step is to find our way to the harbour front. We knew the general direction and with the bicycle traffic moving quickly, we tacked onto the back of some other cyclists who were heading in that direction, stopping at the traffic lights with them. This is novel for me. At intersections with traffic lights, the bicycle lane has its own traffic lights. Groups of bicycle riders wait patiently for the red to change to amber and to green. And away we go. Stick to the right, stick to the right.

Bicycles are given priority

Bicycles are given priority – by cars, buses and pedestrians. This too is novel. We saw many instances where cars broke to allow the bicycle to pass. When this happened to me, it was a little unnerving because I wasn’t expecting the car to slow down for me as we approached the intersection together. Once I knew I had priority as a cyclist, I felt safer.

And I think the priority given to bicycles, encourages participation by many. We saw people of all ages riding bicycles or being transported by bicycle. The cargo bike is often seen carrying young children tucked away in a nest of blankets protected from the wind by the carriage cover. It’s quite lovely to see a little person emerge from under the carriage cover – transported like the very special treasure that they are. We saw some tricycles too; they were parked so I’m not sure who was riding them.

Then there’s the ease of parking in the streets, as well as on the trains and ferries.

Bicycles are parked almost anywhere – at locations random and in facilities provided. Residents park outside their apartments. Workers outside their offices. Commuters outside train stations in bicycle racks. There are some places where bicycles cannot park but these seem few. Bicycles can travel on trains and on ferries, which provide stands and straps to secure the bike during transit.

We soon realised that the cycling family of four we were following through the traffic lights were also visitors to the city. Hmmm, maybe not such a good idea… but it seemed they were heading in the right direction and they obviously also knew that riding briskly was essential. Once we reached the harbour front, we peeled away from them and paused to soak in the morning sunlight twinkling on the blue water under a cloudless spring sky. My nose was pink with cool but the rest of me felt warm from pedalling and I loved it!

Away from the bicycle lanes, we pedalled slowly along the harbour front towards the new waterfront high-rise buildings, a landmark given by the hotel receptionist. Two white swans swizzled their long necks in the harbour waters, children played on Kalvebods Bølge, a timber promenade that weaves along the water; and kayaks sat stacked under the timber walkway as paddlers squeeze into dry suits, preparing to paddle. Soon we realise we’re underneath the Cykelslangen and need to return to the road bicycle lane to reach the next level.

At the Fisketorvet shopping mall (another landmark given to us), I notice a white bicycle icon set against a bright red wall. It is an undercover bicycle park for bicycle riding shoppers that also provides an area for servicing bikes. Then to the left I see the entry to the Cykelslangen.

It was the Cykelslangen that I really wanted to see.

Before leaving Australia, I’d read about a relatively new bicycle way called Cykelslangen which translates to “Bicycle Snake” (Danish Architecture Centre). It opened in 2014 and received praise for its functionality and fun. I wanted to see it and ride it. Under a clear blue sky with crisp air making my face pink, I turned left (sticking to the right) and freewheeled my way onto the impressive Cykelslangen.

It was amazing. Four metres wide, the Cykelslangen winds its way like a snake mid-air between the high-rise buildings. The Fisketorvet mall on one side and new harbour side apartments on the other. It connects the road bike lane to the bicycle bridge which sits at a lower level.

Prior to this cycleway being built, there were 8000 people who used the Bryggebro Bridge across the canal each day, however, access to the bridge from the main road meant carrying bikes up or down several flights of stairs. With the Cykelslangen, cyclists wheel freely between road and bridge on a suspended cycleway that is practical, in that it improves connection between bicycle paths; and fun as it winds mid-air at a gentle camber that’s easy to climb, and easy to speed along on the decline.

Getting on a bike in Copenhagen was made easier by the city’s amazing cycling infrastructure.

Reducing the reasons not to ride defines good cycling infrastructure. Making it easy to move from A to B, safely, will make it easier for more people to get on their bike. Local governments that promote cycling as a transport option, won’t achieve much just by marketing or running a few workshops. They have to invest significantly in cycling infrastructure that increases access to bike lanes, connectivity between bikeways, facilities for parking bicycles; and means for moving with bicycles on trains, trams and other public transport.

Along with Copenhagen’s bicycle lanes, priority for cyclists, facilities for parking and moving around easily, the Cykelslangen is the type of infrastructure that gives priority to travelling by bicycle. It solved a problem. It removed a reason not to cycle.

I’m glad I found it. So glad, in fact that we rode over it three times! 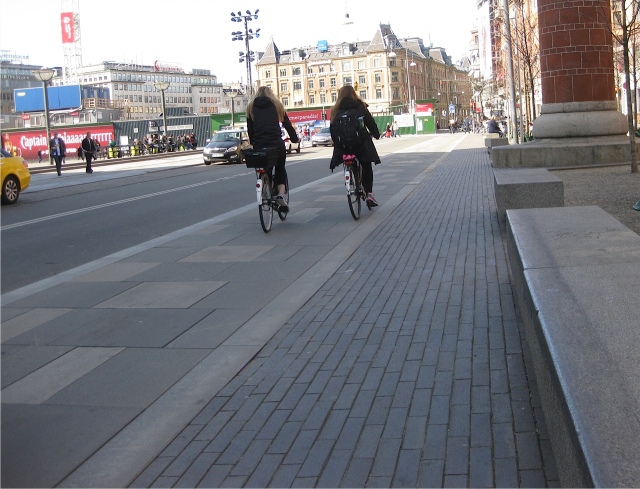 A typical scene where cars, bicycles and pedestrians each have their own lane. The car lane is to the left, then the bicycles, then the paved footpath. Each direction of traffic has this set-up. 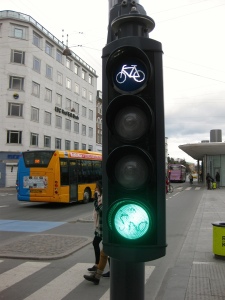 Traffic lights specifically for bicycles regulate the flow of bicycles at intersections. Cars have a separate set of traffic lights.

This photo is taken from my bicycle handlebars and shows a car slowing down to give my bicycle priority in going through this intersection. It’s a bit unnerving at first. I’m more accustomed to the car going first. 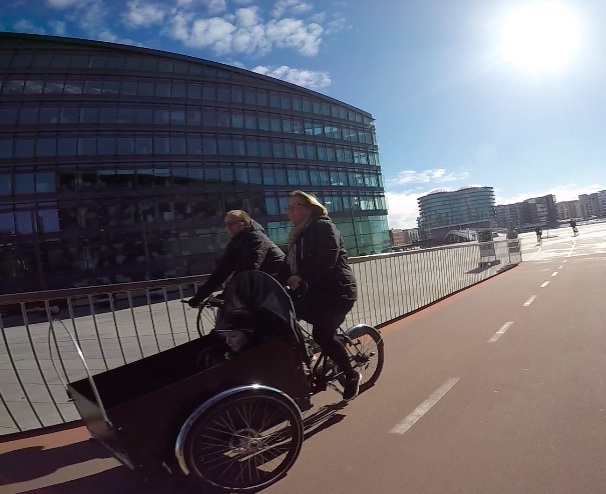 Cargo bike with child in carriage. No cover over the carriage as it was such a beautiful day.

Commuter parking at Norrebro train station. This is only half of the bicycle parking at this station. It stretched for further than my camera could capture. 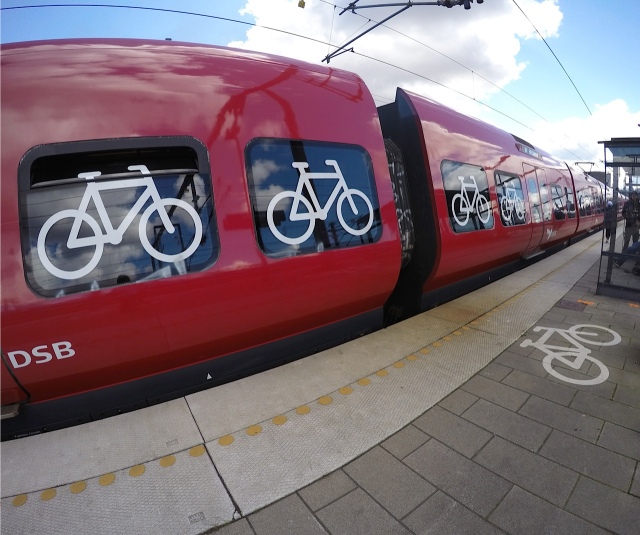 Signs on the train exterior make it clear which carriage are designed for travelling with bicycles.

And inside the train, the bicycles are parked securely in racks. 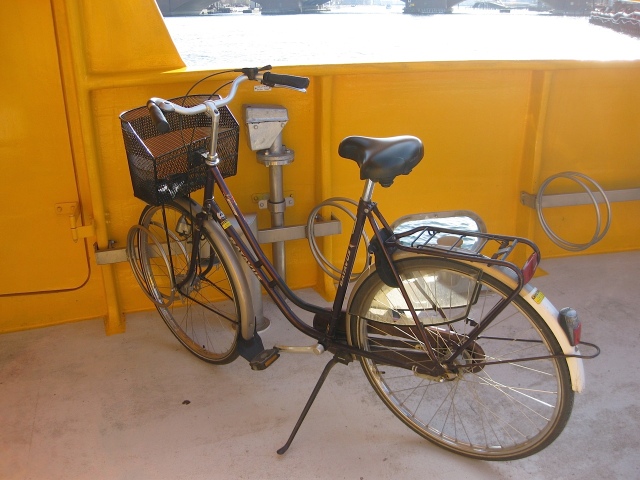 A bicycle parked in a dedicated bike stand on a ferry. 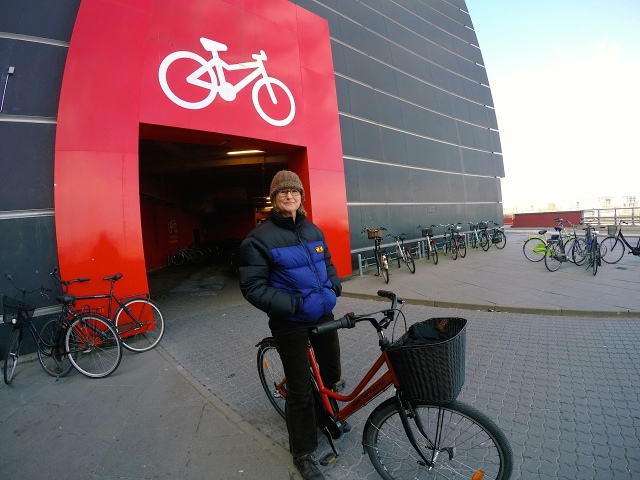 Outside the entry to Fisketorvet Shopping Mall bicycle park. 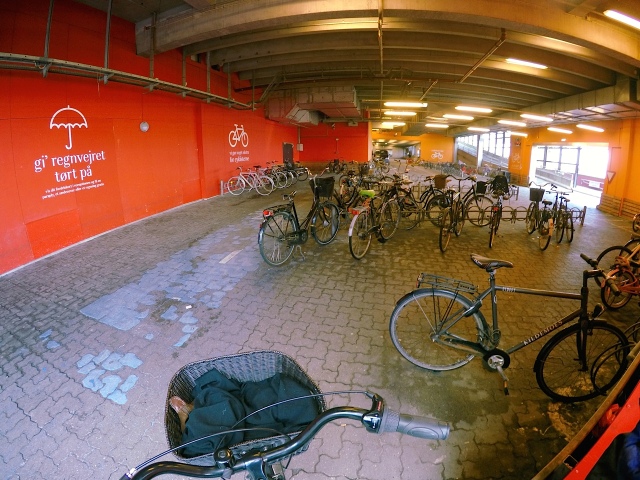 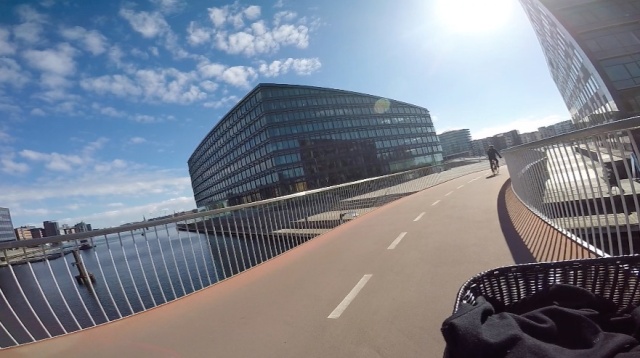 Freewheeling downhill along the winding Cykelslangen. 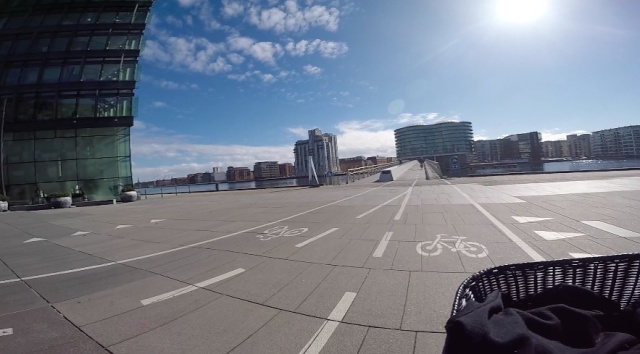 Approaching canal bridge at the end of the Cykelslangen. Two lanes for bicycles on the right and a pedestrian walkway on the left hand side of the canal bridge. 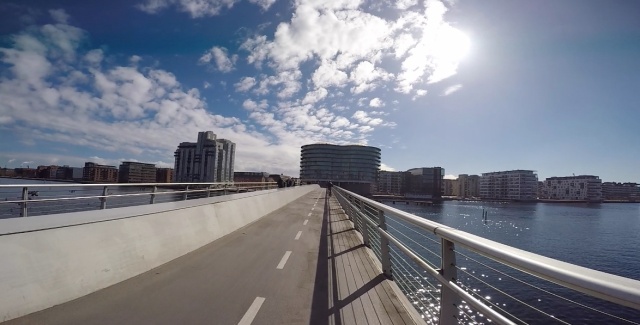 5 Comments on “Cykling in København”