Last week a flurry of south-westerly winds gusted up the east Australian coast and made me reach for the nearest cardigan*. Then suddenly, they left. Strong wind warnings were cancelled. Spring warmth spilled onto lawns, heartened jacaranda blooms and brightened cheeks, pale from winter. Springtime riding became very pleasant.

Today, our Sunday cycle took us into the sunshine, heading south to see if we could spot any Humpback whales.

I packed a thermos of green tea, a mandarin, an apple, towel, swimmers and camera. It’s about eleven kilometres to the lookout at Point Danger and, even riding a casual pace, I expected to be home in a short while.

That was before I saw what was happening by the beach today.

As we rode towards the Currumbin Alley, which is where the Currumbin Creek meets the sea, I saw a line of small swells rolling in on a high tide, dotted with surfers bobbing on their boards waiting for their turn in the line-up. Car parks were full. I was glad to be riding my bike. The surf looked good but perhaps it would be better later when the tide drops. We rode on.

Around the corner on the Currumbin beachfront, the ocean was calm, clear and topped with a blue sky. Then we saw them. Dozens and dozens of little people. Some gathered in groups, some scattered. A palette of running, sitting, laying on the sand, holding hands, listening, yelling, squealing and jumping, splashed with fluorescent pinks and greens and gaggles of adults, observing, some guiding, some calling out loudly.

It was the start of the season for Nippers – the junior lifesavers of Australia’s Surf Life Saving movement. Children aged between five and thirteen can join Nippers and be involved each Sunday morning during the summer to participate, play and have fun on the beach and in the water. They learn valuable skills for life at the beach. Last Summer about 4500 children enrolled as Nippers on the Gold Coast.

The beach was a bundle of young energy playing. It was fun to watch their flashes of determination, effort, confusion, and cheekiness; sometimes flagging interest but mostly plenty of smiles. We rode on.

Further south at Kirra beach, a similar scene was playing out for the Kirra Beach Surf Lifesaving Club. But added to the kerfuffle of dozens of young children, was a sky daubed with kites!

It was the second day of the Gold Coast International Kite Festival. Kite flyers from Australia, New Zealand, Canada, Asia and Germany were flying kites over two days at Kirra, Surfers Paradise and Broadbeach. Some clouds had formed in the north making for a dramatic backdrop to the bold colours and scale of the kites. One kite was an enormous purple octopus that was thirty metres long!

We rode on, through the milling crowds on the footpaths of Kirra and Coolangatta, and to the foot of the hill that would take us up to the Point Danger Lookout. The Boundary Street climb is long and steady, rising about 17 metres. It’s never as difficult as it first looks but by the time I arrived at the top, I was breathing deeply and relieved to see the wonderfully expansive view of the Coral Sea.

I stood at the safety fence looking out to sea.

Soon, a plume of spray, whale breath, liquid and misting.

Then, black back, glistening, sleek, graceful, breaks the surface.

One large. One small, mirroring its mum.

Breeding in the warm Coral Sea waters over.

Heading to their summer home in Antarctica.

*(Known as a sweater in North America.) 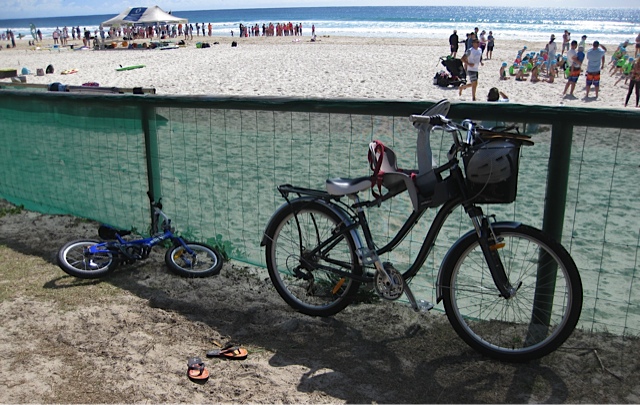 Some families Sunday cycle to Nippers. 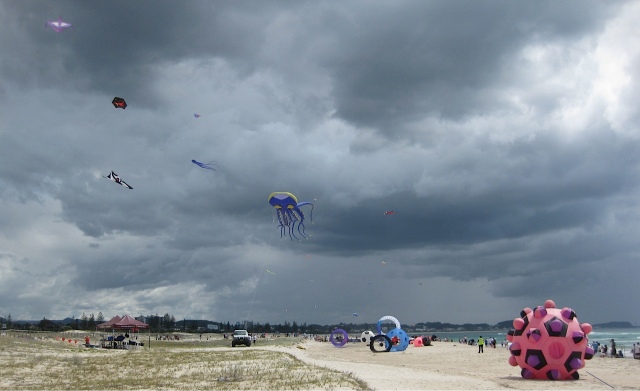 Kites at Kirra for the Gold Coast International Kite Festival

Giant Octopus and other kites waiting to fly.