Our use of highways and high speed trains has seen many old railway lines abandoned. Some old railway corridors have been re-purposed for walking, cycling and horse-riding. Known as rail trails, they transform a dilapidated piece of public infrastructure into a useful public asset. Why? Rail trails attract tourists, encourage active lifestyles, provide safe pathways free of vehicles and fumes, and they often serve as valuable habitat and wildlife corridors.

Old trains travelled slowly through the contours of the land, linking small towns and crossing waterways. And it’s this last purpose that defines Currumbin’s hidden rail trail. Since 1903, it’s been spanning Currumbin Creek.

Of course, being only 173 metres long, the Currumbin Creek railway bridge is unlikely to qualify as a rail ‘trail’ but it is recognised as having historical significance. The bridge was part of the South Coast railway line that ran between Brisbane and Tweed Heads on the New South Wales border. The line operated between 1889 and 1964.

“It is one of only three examples that still exist of infrastructure associated with the original railway line and the only structurally complete bridge still in existence on the line.” – City of Gold Coast

After the railway line closed in 1964, the bridge was used to carry water and sewer pipes as well as pedestrians. As a valuable link between the suburbs of Palm Beach and Currumbin, the bridge was upgraded in 1994 for use as dedicated pedestrian/bicycle pathway.

Last Monday, I saw wire security fences appear in the carpark near the bridge. Tuesday, I saw demountable work offices appear. By the end of the week, a sign went up. The Currumbin Creek railway bridge – our hidden rail trail – is to be closed.

The sign said: “This 113 year old ex-railway bridge is to be restored to protect its historic significance and improve pedestrian capacity.”

The bridge renewal will see it widened, resurfaced and strengthened.

So with these changes soon to happen, I rode out and took some photos to remember the bridge as it is now.

On the bridge at high tide. 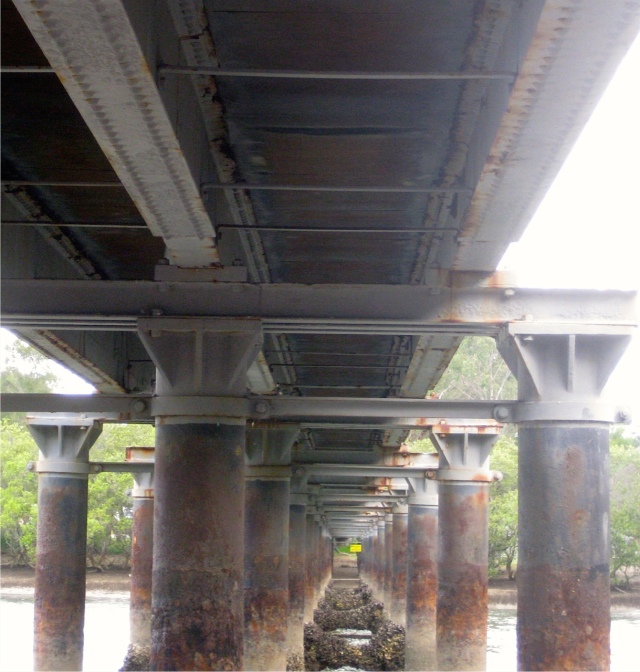 Under the old railway bridge at low tide shows rust and oysters.

Beneath the old railway beams and to the right, the bigger faster and often congested motorway. 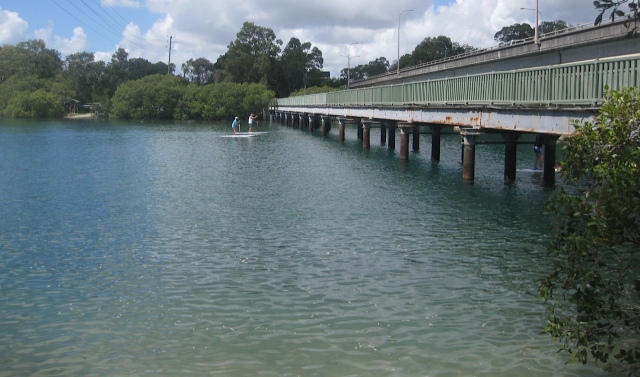 Stand-up paddle boarders preparing to duck their heads as they pass under the bridge. 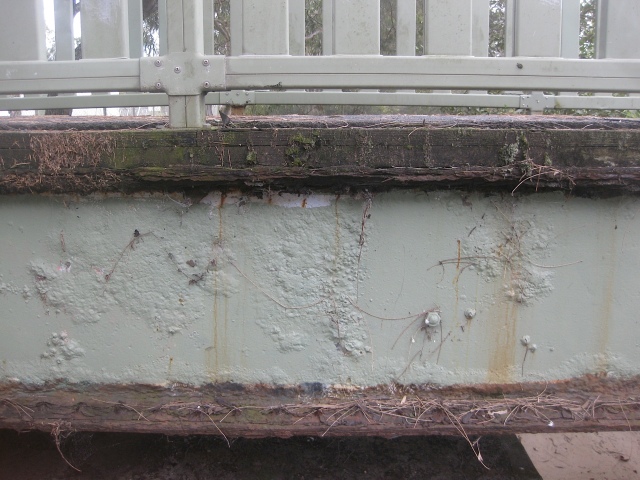