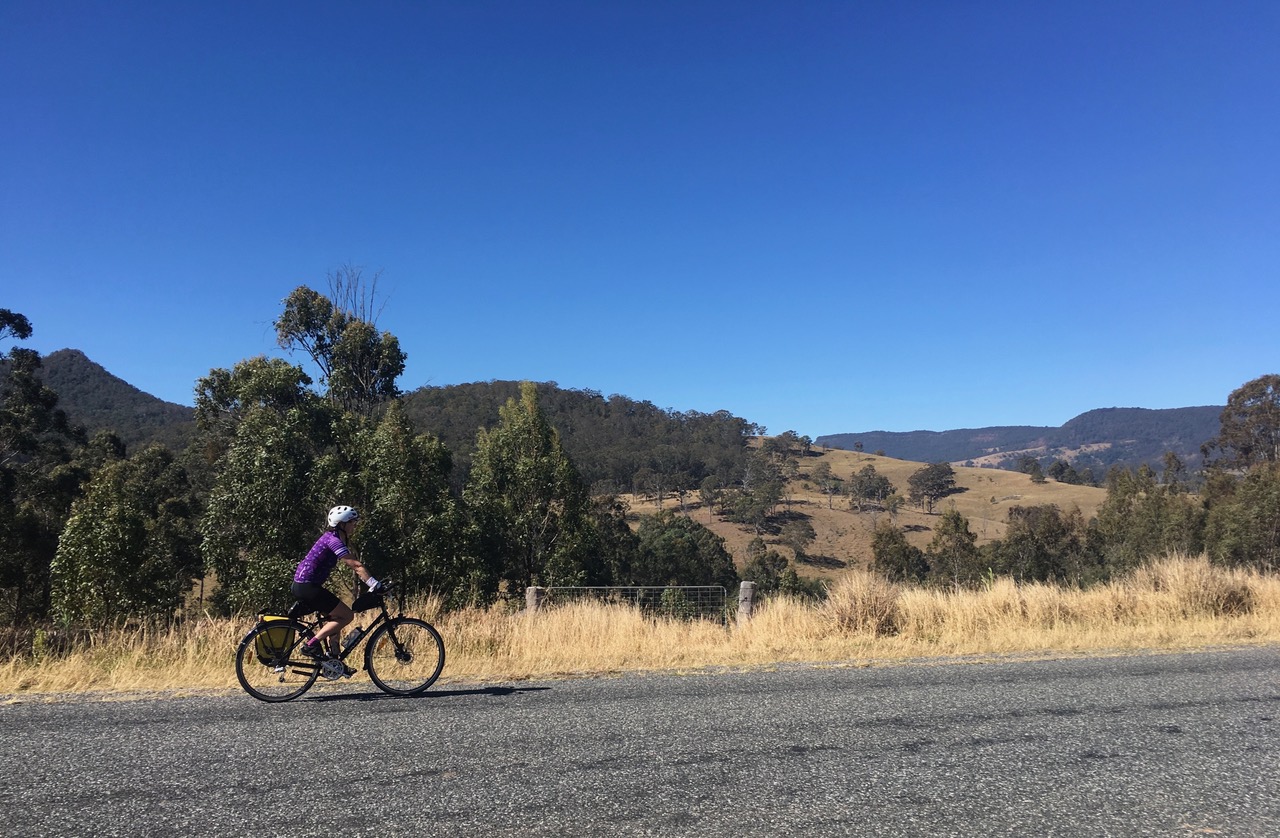 Four days of riding my bike with little else to think about. Days warmed with spring sunshine and draped with landscapes that stretch the eye to where earth and sky shimmer as one. Night skies aglow with moonlight carrying the sounds of weary bodies sleeping. Sleep, Eat, Ride, Eat, and Repeat. This was my first ‘Cycle Queensland’ Adventure Tour and it ensured my spring began with a most enjoyable ride.

Cycle Queensland is an annual event run by the not-for-profit bicycle advocacy organization, Bicycle Queensland. Each year, the tour takes a different route delivering about 500 cyclists a nine-day cycling holiday. This year’s ride started inland at Goondiwindi, a small town in Western Queensland, and ended at Currumbin Beach on the Southern Gold Coast, where I live.

Two things attracted me to riding the 2017 route. One was that the tour would finish where I live and there was something strangely appealing about the thought of riding home. The other attraction was the route would take us over ‘Tomewin’, a road that connects the Tweed and Currumbin Valleys, and bears a challenging climb that I’d long wanted to try. For similar reasons, Jane decided to join me for the four days.

Choosing the half-tour option, my Cycle Queensland (CQ) began in Stanthorpe known best for apples, wine and cooler climes due to its elevation of 811 metres. Our bikes had been serviced and boxed by our local bike shop, and then transported by truck under the guidance of Bicycle Queensland. After a bus and train ride to Brisbane, we caught a bus to Stanthorpe chartered by Bicycle Queensland.

When we arrived in Stanthorpe, the CQ campsite was chilled, both in mood and temperature. The full-tour riders were relaxed having enjoyed a rest day after riding four days from Goondiwindi to Stanthorpe. Plus, an icy southwesterly was whipping across the campground. After registering at HQ, finding our bike boxes, assembling our bikes and sorting the night’s accommodation, we were ready for the nightly pre-ride briefing at 6.30pm.

Our first day of riding took us from Stanthorpe to Woodenbong along roads lined with gum trees, dotted with granite boulders and splashed with bellbirds ringing. It was also the route’s longest day. Riding a distance of 105.4 kilometres, I experienced my first ever century-plus ride. And survived! Thanks to morning tea at a lavender farm with freshly made lavender scones served with jam and cream, and a healthy tailwind throughout the day.

Day Two brought an icy greeting with sub-zero temperatures overnight. Ice had formed on our tent, bike handlebars, tyres and bike bags. I was glad to be up and eating, and even happier once we started riding and generating warmth. Our second day ended in Kyogle after 60.5kms among bushland chiming with Bellbirds and beside pastured paddocks thirsty for rain.

I know you now…

Climbing rolling hills featured in the route from Kyogle to Murwillumbah on Day Three. Along winding roads with views of Wollumbin coming ever closer, we entered the Tweed Caldera having ridden 1059 metres elevation over the 76.8 kilometre ride. However, rolling hills bring a reprieve. You climb then you descend, then you climb again, and descend. Climbing Tomewin on the following day brought a different story.

With Tomewin, you climb and climb. For five kilometres, you climb, with no downhill reprieve. Yet ascending Tomewin on our final day brought my personal highlight. The climb was harder than I’d expected and more rewarding too. Rolling over the top of the range at the NSW/Queensland border and descending into Currumbin Valley, I felt the exhilaration of having looked an aspiration in the eye and being able to say, I know you now.

Although there might be hundreds of riders participating in this tour, I found a quietness riding along that stands in stark contrast to city riding. In a wide landscape with few cars, the sounds of wind rustling trees and grasses, punctuated with the calls of magpies, galahs and cockatoos, are all there is to hear. A quiet space descends. As I sweep downhill, as I climb steadily up the hills, something quiet lands within. Perhaps it’s the simplicity of travelling by bicycle. Perhaps it’s the closeness to the elements as they touch my senses. Whatever the source, this quiet is a feeling I enjoy.

Boarding bus after a stop at Aratulla

Jane at Stanthorpe after registering at HQ. Excited? Yes! 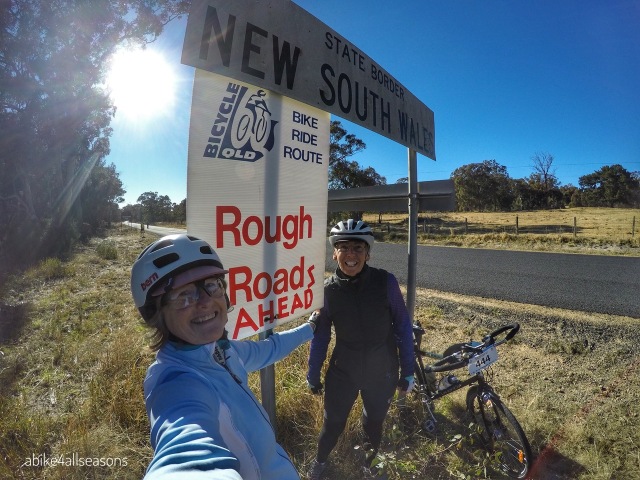 Crossing the NSW border on the way to Woodenbong. 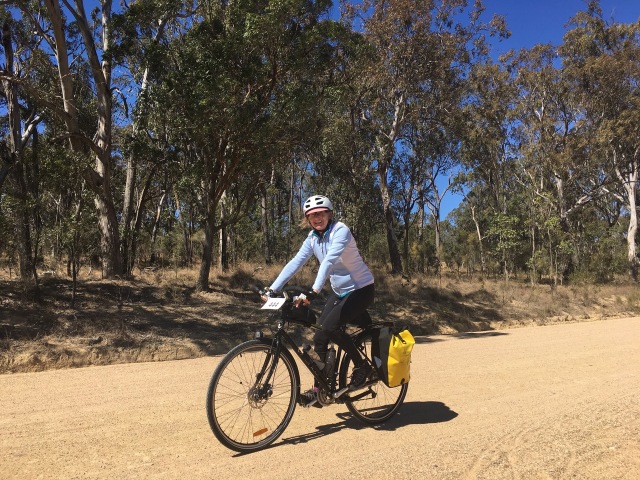 We had a couple of gravel sections on the road to Woodenbong. 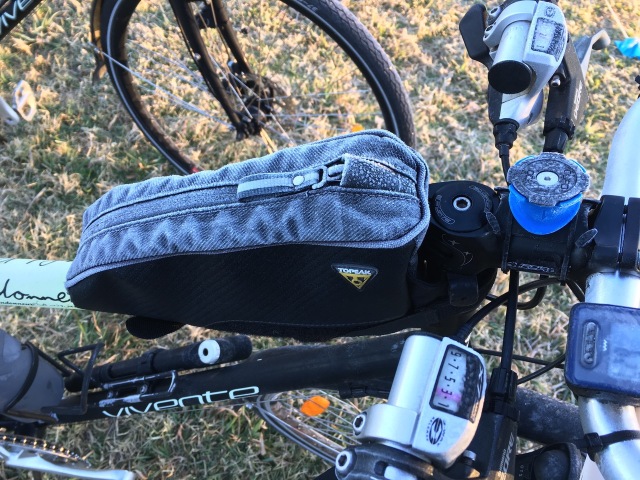 Ice on every surface of my bike!

Mt. Barney was a backdrop for our ride to Kyogle.

Grasses in a wide landscape. 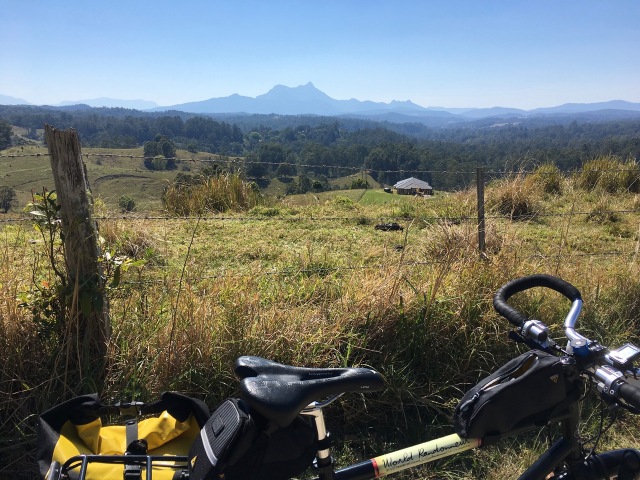 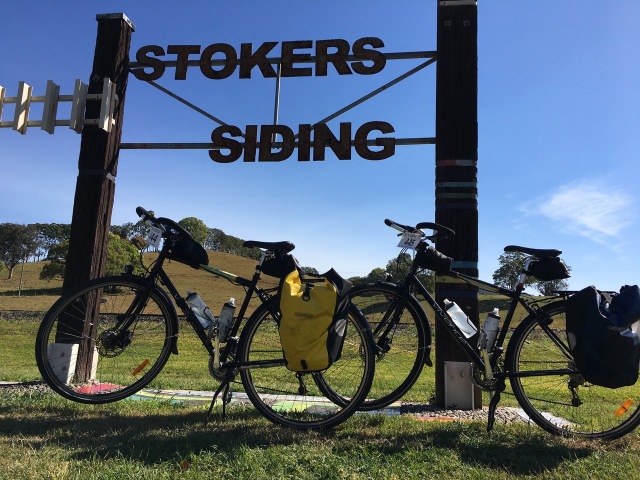 On the outskirts of Murwillumbah, we stopped at the old railway stop of Stokers Siding. 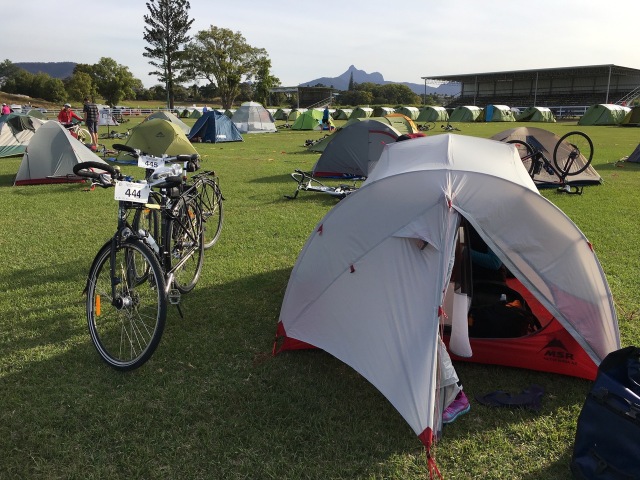 Campsite at Murwillumbah Showgrounds with Wollumbin in the background.

Canefield-lined roads as we leave Murwillumbah through the Tweed Valley.

Took a ride to take a walk 🌿☘️🌿
Calm seas💙Cool air 💙and a setting moon 🌝 Good vibes from Greenmount Hill this morning 🌏
Movie making on the Gold Coast 🎥
Good morning 🌞
A new moon brings a sparkling new day 🌞 Saturday cycling to the QLD/NSW border 🚴🏼‍♀️🚴🏼‍♀️
Sunshine and a cool southerly along the Currumbin Valley this morning 😍
Rainy day ride and collecting coffee 🚲241 #lockdown outing ☺️
What’s that Skip? You think it’s time to go home..?
Cruising along the basalt-lined coast of Bargara with @ljr57
What is she saying…? Find out over at @bicycle_qld ‘Women on Bikes’ is a fresh video just released by Bicycle Queensland.
Not a bad day to be out riding 😉
The Northern Rivers Rail Trail will be an economic, social and environmental asset for the region @tweedshirecouncil #onformation