Treadly Time along the Torrens – Pt.1 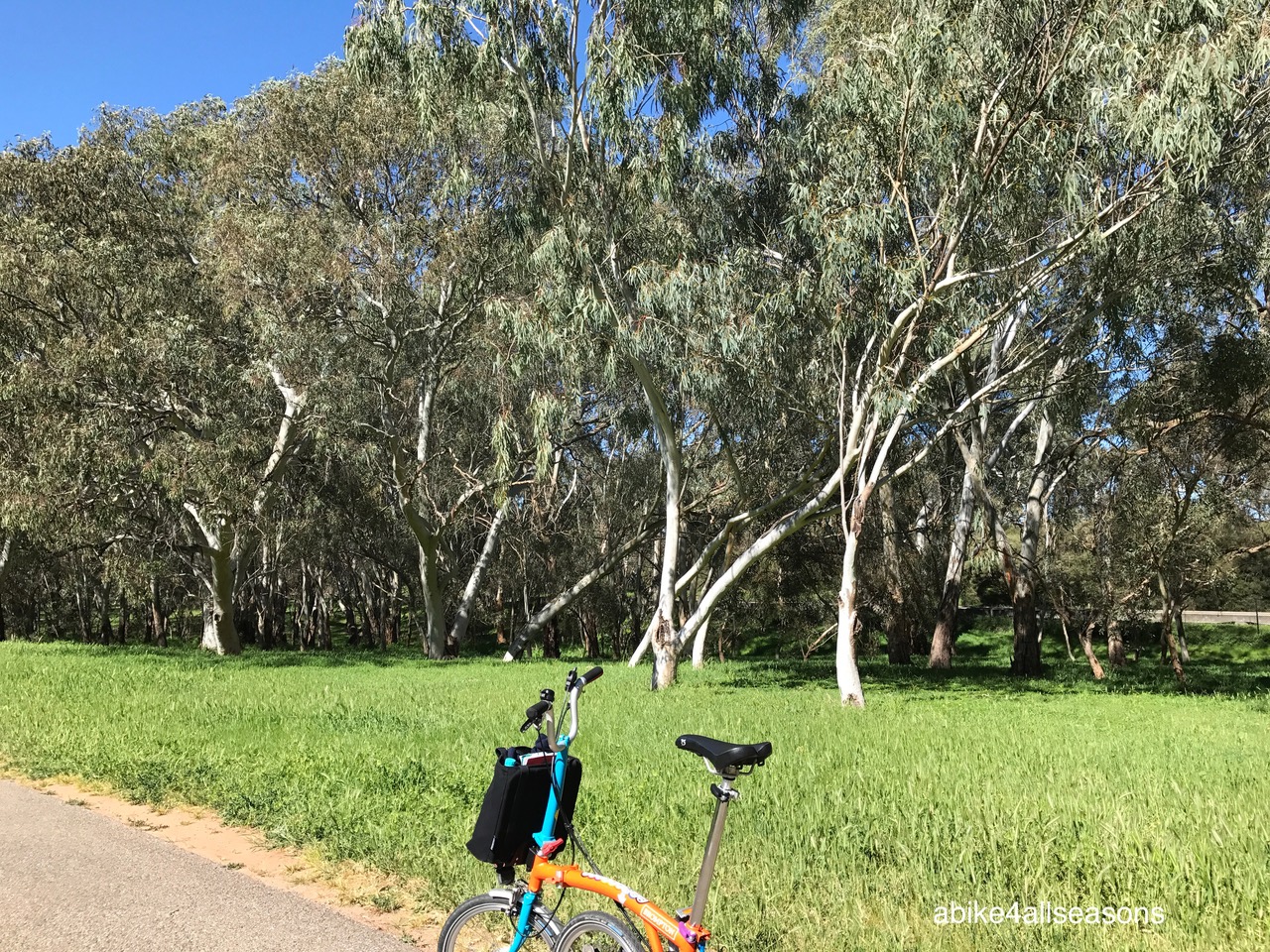 Four days had passed since I’d ridden a bicycle and my feet were getting tired from walking everywhere. Adelaide City is good for walking. The terrain is flat, a feature that also makes it good for cycling. When I first arrived, I hired the Adelaide Free Bikes but, with plans to explore the city’s impressive cycleways, I wanted to ride something that I felt more comfortable on.

Hire bikes come in all shapes and sizes. Some of the best hire bikes I’ve experienced have been those hired from a bike shop. Visiting Gothenburg in 2016, we enjoyed relatively new hybrid bikes hired from a bike shop owner who carefully adjusted each bike for a comfortable fit. They were a pleasure to ride. Visiting Adelaide, I found Treadly Bike Shop and guess what they had for hire? Brompton folding bikes!

I booked a half-day hire via Treadly’s bike hire website for AU$25. The booking process was easy and the website gave good information about the bicycles and places to ride around Adelaide. Treadly’s hire bikes are Brompton M3L models which feature dynamo lights, mudguards, bell, an easily adjustable seat height and the capacity to fold up. Treadly also add a slim front carrier bag, a combination lock, a cool Nutcase™ Metroride Helmet and helpful maps.

For my half-day hire, I decided to ride along the River Torrens. The brown narrow river meanders slowly from the Adelaide hills in the east, through the flat plains of Adelaide city and meets the salty waters of the Gulf St. Vincent. Along its banks runs the River Torrens Linear Park Trail. Until my visit to Adelaide, I’d never heard of linear parks. Researching the term, I learnt they are parks that are longer than they are wide, typically urban and might also be called greenways, parkways, or wildlife corridors.

The River Torrens Linear Park was not only the first linear park developed in Australia, it is also the continent’s largest hills to coast park. From Atheltone in the eastern foothills, the River Torrens Linear Park Trail travels 46.5kms to West Beach.  After meeting the river near the Adelaide Zoo, I rode east for about 11kms (if you’re familiar with Adelaide, that took me as far as Darley Road).

Under warm spring sunshine, the bluest of skies, and canopies of river gums, I rode happily, easily and safely along the river’s reedy banks. Occasionally I’d come across some areas under reconstruction which, as I later found out from Treadly Bike Shopowner Sam, was the aftermath of a string of severe storms that struck the city twelve months earlier, producing a state-wide power outage.

At one point I heard a sound that I didn’t recognise. It was unfamiliar. Mechanical like a train yet different. As I rode on, the trail veered away from the riverbank and mirrored a strange road with concrete tracks. I hadn’t seen anything like it before. The sound became louder and then a bus whizzed seamlessly along the tracks. I’d just seen the O-Bahn Busway in action. No traffic to contend with. Express!

After turning around at the Paradise Busway Interchange near Darley Road, I meandered with the river again and came across an interesting community. Lochiel Park is an experimental development with the ambition of creating a ‘green’ village on fifteen hectares. The development is recognised by Josh Byrne (ABC TV Gardening Australia presenter) as a star performer for sustainable lifestyles. Sixty percent of the land is shared green space and the remainder houses 106 dwellings built to exceed the norm in energy and water efficiency. I saw a community garden, water ponds, streetscape sculptures and encouraging path markers for the Lochiel Loop that said ‘woosh!!’ and ‘push!!’ as I rode along.

Returning to Adelaide City, I met bicycle commuters on their way home from work. There were trail-runners padding along too and kids enjoying the playgrounds that dot the linear park. A chocolate milkshake, rowing boats resting and the day closing, I finished my first ride along the Torrens. In two days time, I’d explore some more.

[This post is the second in a series of stories from my visit to Adelaide.] 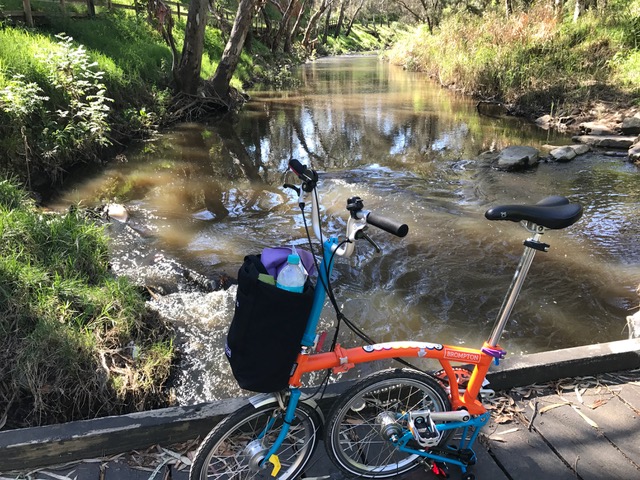 A bus whizzing along the concrete tracks of the O-Bahn Busway. 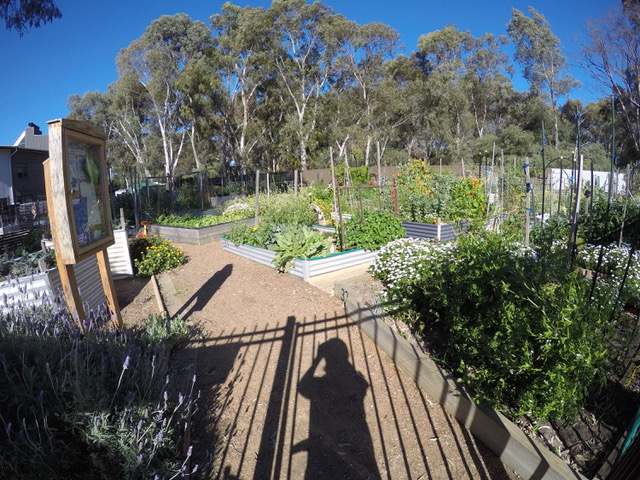 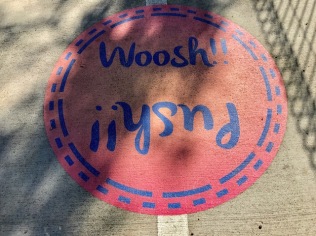 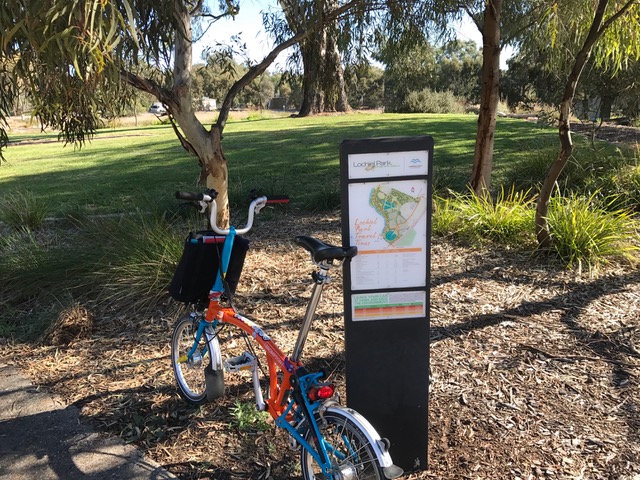 Lochiel Park signage gave commuting times for walking, cycling or catching a bus as an encouragement to not use the car.

About to ride under Albert Bridge built in 1878. 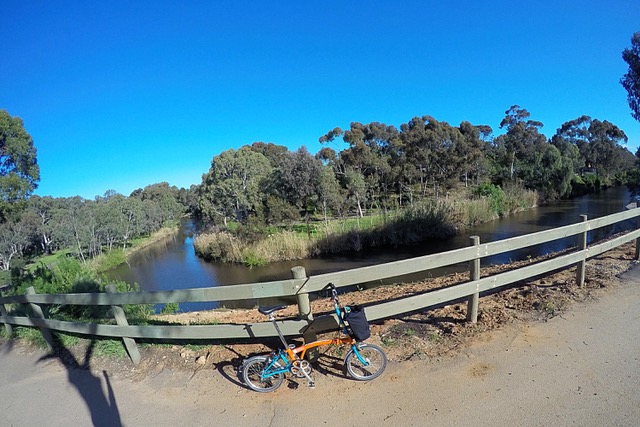 The view from my chocolate milkshake 🙂

6 Comments on “Treadly Time along the Torrens – Pt.1”