A sandy ride on a short day

On the eve of the winter solstice, the sky cleared to a brilliant azure and stayed that way. All day for the shortest day, the sun shone without a blink. The wind rushed in from the south-west, cooling the air and relaxing the ocean into small waves, clean and clear. It was a beautiful day to be outside, in the sunlight, by the beach and riding my bike.

Well actually, ON the beach ON my bike. It was the perfect day for a bit of beach riding.

Riding a bicycle on the beach always feels like a treat. The conditions have to be just right. The tide has to be low and the sand must be firm enough to avoid being bogged. Plus, you have to be prepared to risk the rust that might happen if you don’t wash your bicycle well enough afterwards.

I hadn’t ridden my Vivente tourer on the beach before; it was too new. Until now. Over three years old and sporting some surface rust just from living by the beach, it was time to break out for a long overdue beach ride. I was interested to see how it went. The tide would be dropping over the afternoon so we rode south via the street and cycle ways to Kirra Point. By the time we’d reach there, the tide would be low enough and we could enjoy a tailwind on our return trip north along the beach.

Arriving at Kirra Point and walking our bikes through the soft sand track towards the water’s edge, we see boats and trucks and a gaggle of people humming around. It’s the time of the year when the mullet men take to the beach. By that I don’t mean a bunch of guys wearing strange haircuts! No, it’s the men who fish, commercial fishermen, who catch schools of Sea Mullet (Mugil cephalic). Annually, the sea mullet emerge from the estuaries and head to the open sea to spawn. When they do, the fishermen who wait patiently day after day, hope to be in the right place at the right time to net them. This day they were. We watched for awhile, took some photos and then started our ride north along the sand.

When I owned a mountain bike, I used to ride often on the beach. Their tyres, wide with raised knobs, are designed to grip in rough or loose terrain and make beach riding quite easy. Even though the Vivente’s tyres are not as wide and bear a less vigorous tread, they still rode well. The main difference is the bike’s weight which being steel, weighs 17kg, heavier than many. Plus I had a pannier filled with a spare jacket, a beach towel and wet swimmers (yes, it was a great day for a swim too!)

So riding the Vivente on the beach was a little different from what I was used to, but it was very enjoyable.

From Kirra Point, we rode past Bilinga, Tugun and finished beside Elephant Rock at Currumbin. There was a shallow creek crossing through brackish water near North Kirra. It was shallow and rideable. At Tugun, the rocky outcrop known as Flat Rock meant we had to carry our bikes over some rocks to finish our ride at Currumbin. Along the way there were people sunning on the sand, others walking on the beach, young boys playing beach cricket, and as we rode past a small family sitting together in a cosy huddle on a patchwork of towels, a little boy’s voice emerged: “we should bring our bikes to the beach”.

To which I thought with a smile, yes you should!

With smooth sand, a tailwind and a spectacular view of the Coral Sea, it’s a beautiful way to enjoy the beach.

Oh and we also had a healthy dose of sunshine on the eve of the shortest day of the year. 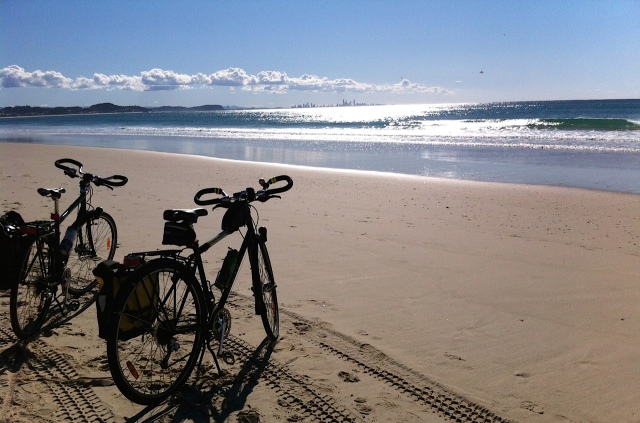 Looking north from Kirra Point with our beach ride about to begin. In the distance, you can see the skyline of Surfers Paradise. 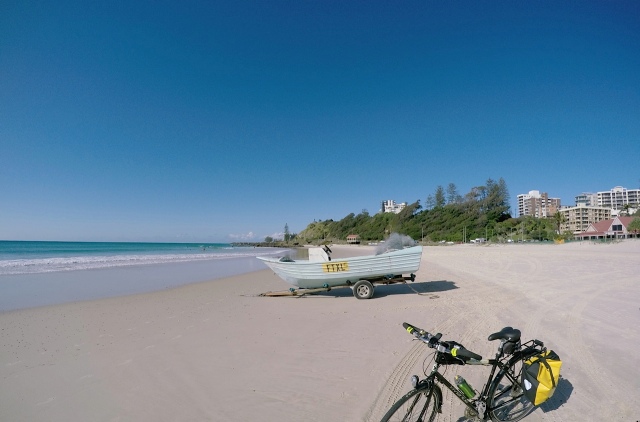 Kirra Point with fishing boat waiting for the next netting run. 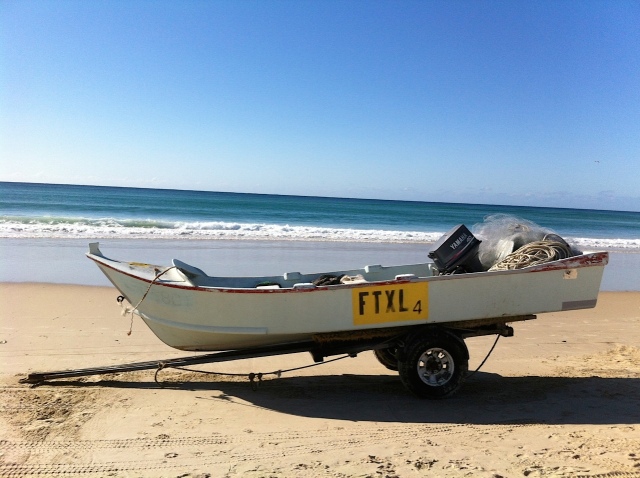 Beach scene with trucks and people and plastic crates for carting fish.

Scene of the catch.

Plenty of firm sand to ride on. 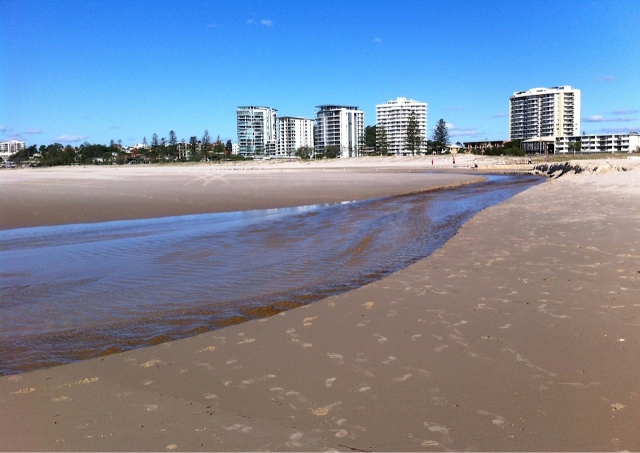 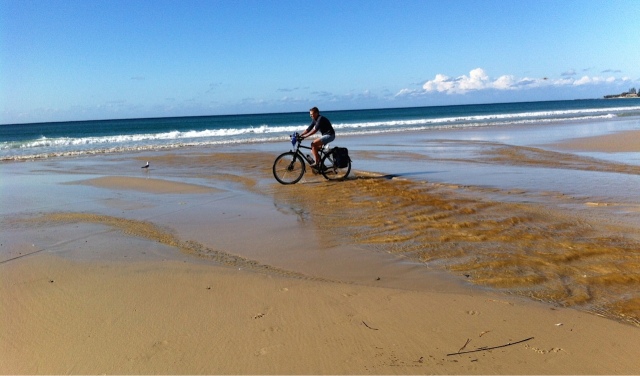 A sandy ride on a short day.

← Ignoring the noisy third
A not so wintry June… →

21 Comments on “A sandy ride on a short day”

Weekend Pizza-packing 😆
Autumn is here 🥰 Cooler mornings and gorgeous LIGHT✨
Ocean view, sunshine, blue skies and a bike ride... and a coffee on its way 👌
Happy Easter 🐣🐥...
A quiet spot along Currumbin Creek - greens and greys with a splash of yellow ...
It doesn’t matter where you live... if you’re getting from A to B on the roads, pathways or footpaths, get on the Harmony trail 🧡 Join me and take the pledge for The Commuter Harmony Alliance - a @bicycle_qld initiative that Advocates for a Connected Community of Commuters🧡
It’s here - time to enjoy 🚲🌟
Sensational Sunday 💚💙
Gotta love this seaside view along Kirra Point 💙 🚲🚲
This cotton tree has grown by about a metre in two weeks! With all the rain we’ve had, everything is growing like crazy 💚
Let’s celebrate and keep the the wheels turning toward positive change 🌟 Swipe to see my answers about inspirational women, superpowers and more 😄 Thanks to @bicycle_qld for the feature and the thoughtful questions. #iwd2021
Pedalled over to @dust_temple for some 70s-inspired live music 🎶🎶 from @danagehrman & @dannywiddicombe . Another great gig from @artemusgc 👏👏👏