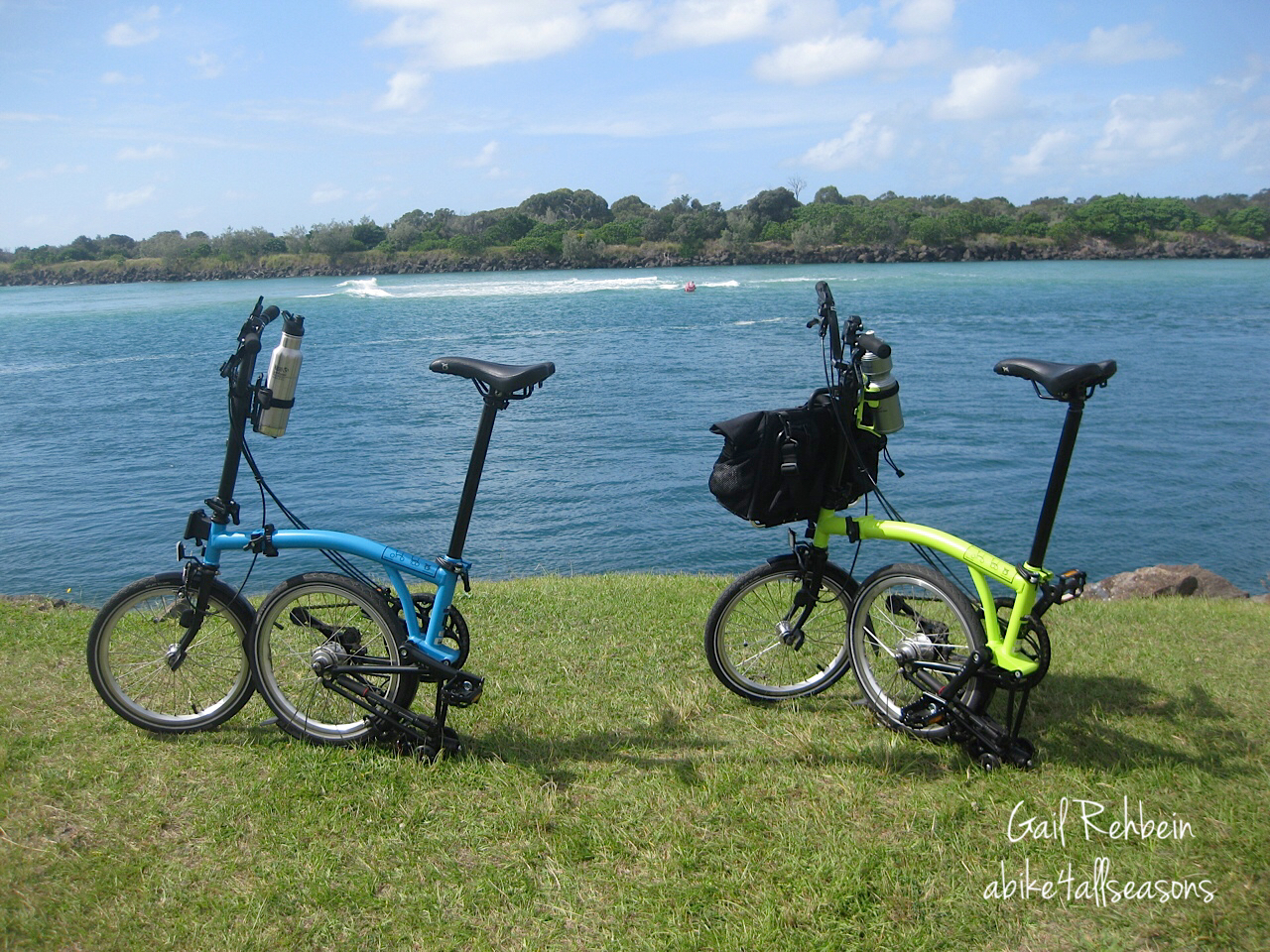 This is another guest post from Jen Cooper. In her previous post, Big Bikes Little Bikes, it was decision time. Now let’s see how these Bromptons ride. Here is the second of Jen’s bicycle stories…

We had been searching for a solution to taking bikes on our camping and kayaking trips, and being able to carry and store them easily. After research done at intervals over a period of eighteen months, we found and purchased Brompton bikes.

Bromptons are a lot of fun. They sit in the foot well of the Subie and take thirty seconds to assemble. They are as comfy as our old hybrid bikes – except for very bumpy surfaces. They are really designed for relatively smooth paved paths. I’m not sure how our European friends manage the cobbled streets on them.

In November last year we were in Hervey Bay for a night before heading offshore to Lady Elliot Island. So the morning in Hervey Bay began with a cycle tour along the Esplanade.

They say vibration is good for the bones and for balance. Riding Bromptons with the little wheels and practical firm suspension across every board on the Urangan Pier did that. My bones should be supercharged with calcium, and I’m ready for the high wire act. Riding into the wind completed my physical activity program for the morning.

These bikes hook you – they are really well made.

These bikes hook you – they are really well made. They are strong, compact, neat, and ‘sick’. This was the observation of a young teen in Ocean Shores when we rode past. He wanted one of those.

Interestingly the new bikes have reinvigorated our interest in cycling – we go out once a weekend in winter. In summer when the mornings are light, we generally get out on another day during the week. We haven’t tried it yet, but we worked out that if we rode into the city and didn’t feel able to get home again, we could fold them and take them on the bus. We could also put them into the boot of a taxi. No special racks required!

We rode with some friends along Brisbane’s Southbank one weekend, and although one friend observed ‘those bikes really do look quite strange’, our Bromptons carried us comfortably and safely for a 20 km round trip.

Although there are only six gears on our models, we have managed some decent hills. Noel’s top speed downhill is 40 kph, while I baulk at much more than 30 kph – that top heavy feeling at speed makes me nervous.

A few weeks ago we dusted off the old bikes because our neighbours invited us to come with them to a local park with dirt track cycling. The Brompton’s tyres, apart from making the ride a bit hard and bumpy, dig in to softer surfaces. This ride was a trial to see how we managed our hybrid bikes after eight months on the Bromptons. We managed well enough, I thought the big bike felt more stable and manoeuvrable because the handlebars are wider. Noel thought it was because of the larger front wheel.

The crucial test. Would we give up the Bromptons and go back to the big bikes?

I don’t think so.

Jen Cooper is a part time writer with an interest in all things outdoors, and indoors she is researching and writing a narrative non-fiction based on family history.

The Brompton folded for easy storage and transporting.

Unfolding the Brompton has three stages and, in case you forget, these stages are printed on the bike’s frame.

← Big bikes, little bikes
Back in the neighbourhood →

18 Comments on “Bromptons are cool!”