Mobikes on the Gold Coast 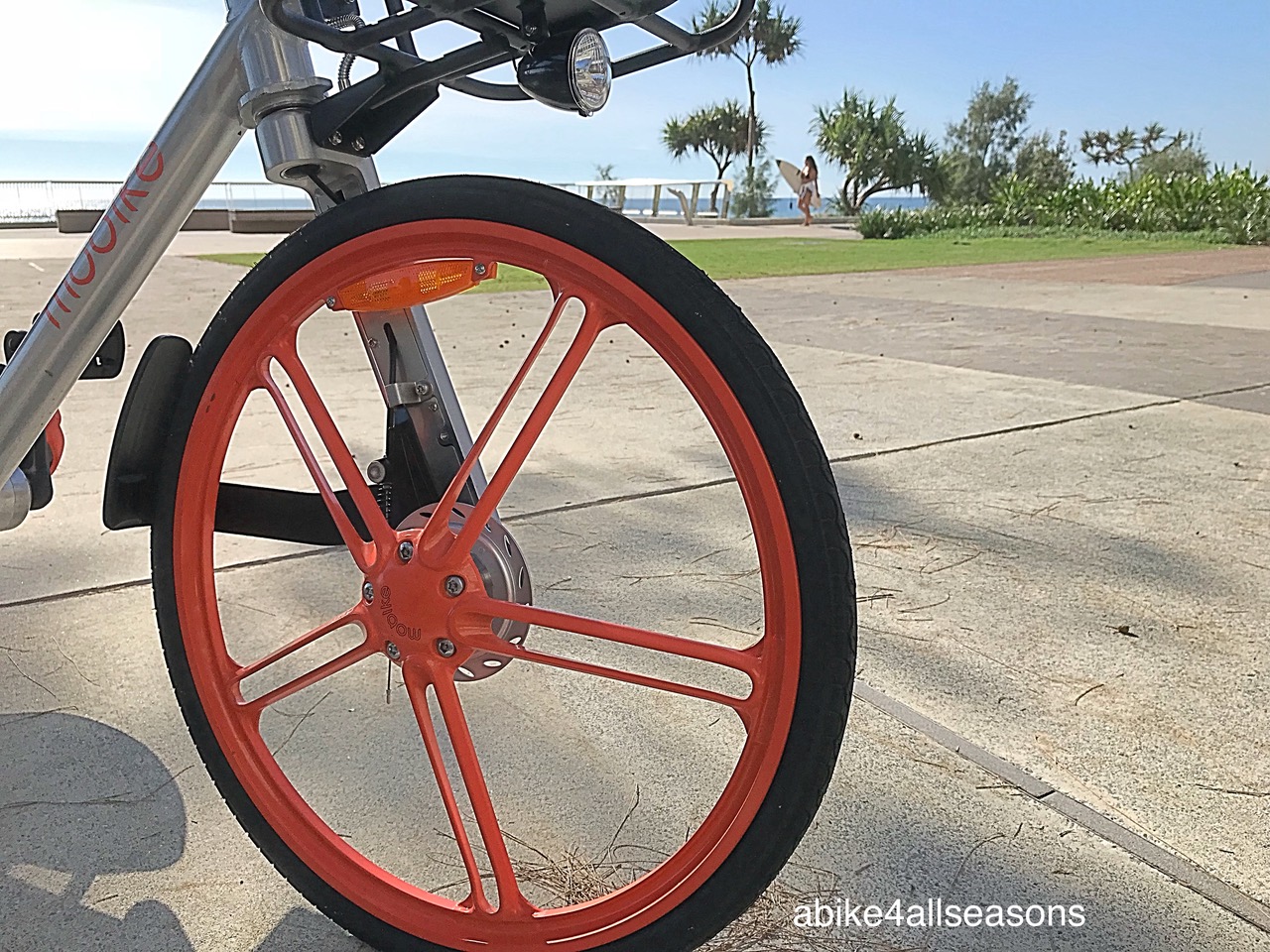 With the launch of Mobikes last week, the Gold Coast joined the many cities that provide a public bike-share scheme.

Bike-sharing schemes allow people to share public bicycles. Their successful use contributes to creating sustainable cities by providing residents and visitors a transport option with low environmental impact. The specific features of each bike-share scheme vary from city to city.

With Mobike, the Gold Coast City Council has opted for a dockless bike-share scheme. Put simply, this means that the share bike can be left anywhere. This contrasts with bike-share schemes I’ve seen in Brisbane, Oslo, Copenhagen and Gothenburg which all have docking stations for returning the bikes (click on the hyperlinks links to read about my experiences in those cities).

Dockless systems track hire bikes via GPS. The rider must first download an app to their mobile phone, create an account and set up details for paying the bike hire charges. Then the rider finds a share bike and using the mobile phone scans the QR code on the bike. This unlocks the bike, making it available for riding. To signal their hire is over, the rider must scan the QR code again before leaving the bike.

Convenience and affordability are the two advantages dockless systems are said to bring. On the flip side, dockless share bikes have cluttered footpaths when not parked appropriately, have been vandalised, thrown into waterways and wedged high into the limbs of urban trees. It gets messy. Perhaps that’s why I prefer to see the neat line-up of bikes at docking stations. There’s that reason and also the responsibility engendered by having to return a bike to somewhere.

One week of the Mobikes on the Gold Coast, and most of them were seen behaving well, standing upright to the side of a pathway or around a designated bicycle parking area. And they look very appealing with their bright orange wheels and silver frames. Helmets are provided and each bike has a sturdy rack for carrying a beach towel, a briefcase or a bag of groceries.

Having a bike-share scheme on the Gold Coast is a great initiative and I hope it’s well-used, enjoyed and respected. At the moment, I can’t see a use for bike share within my transport needs on the Gold Coast but if that changes, I’ll let you know. 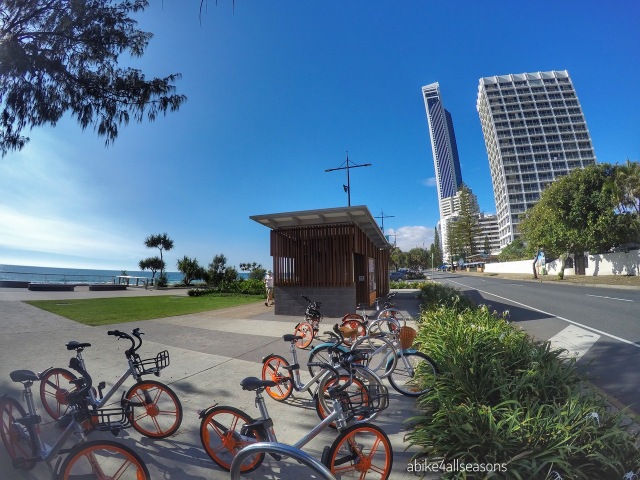 Mobikes parked at a bike rack on the Surfers Paradise esplanade. 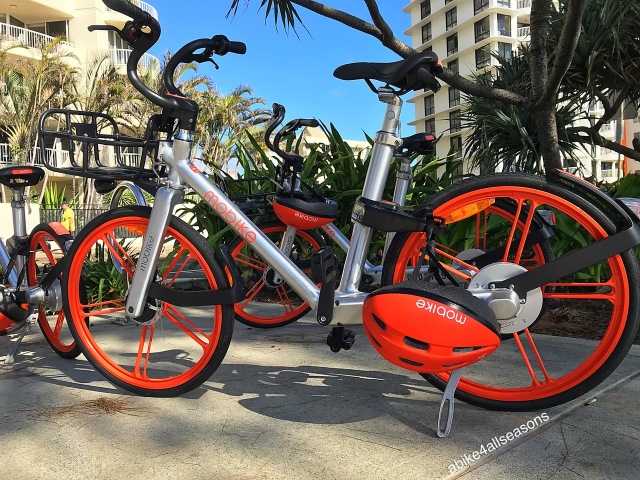 Helmets are provided and each bike has a sturdy rack. 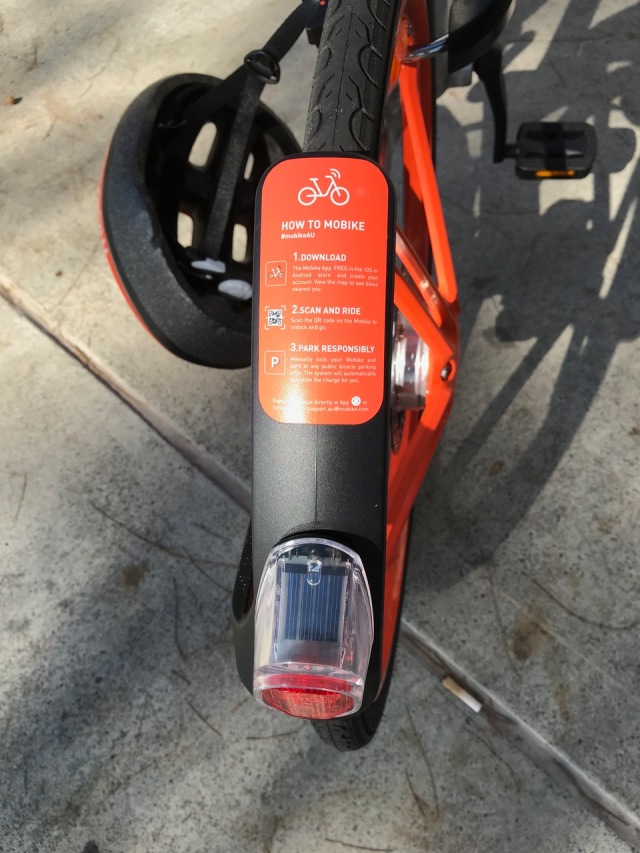 The rear mudguard has instructions on ‘How to Mobike’. 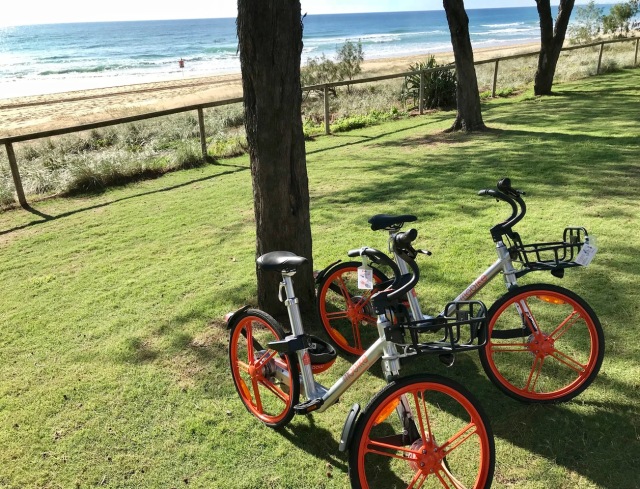 ← Visiting the Minties
Summer by numbers →

6 Comments on “Mobikes on the Gold Coast”