Tiny wheels with a big heart

Recently, I became involved in something a little different from my usual riding. Although, with the Brisbane Valley Rail Trail behind me and the Great Vic ahead, I have to say 2016 does seem to be shaping up as ‘The Year of the Organised Ride’.

As October drew its first breath, so too did the Gold Coast Brompton Riders with its first group ride. The call went out on the group’s newly created Facebook page, sporting a photo or two from my abike4allseasons photo collection:

I haven’t seen many Bromptons on the Gold Coast. I’m not sure why that is. Maybe they’re out there riding in different parts of the coast away from my usual trails. Maybe there just aren’t that many. It seems to me that the Gold Coast’s relatively flat urban landscape is quite suitable for riding a Brompton bike.

Nine riders turned up for the group ride. Four were Brompton bicycle riders and the other five were curious two wheel friends. This included two road bikes, two tourers and one Bike Friday which is a custom built folding bike. A few local Bromptoneers couldn’t make it but are keen to be at the next ride. There was also interest from curious non-Brompton riders unsure whether to come along or not.

Among the Brompton riders was Jen Cooper. Back in June, Jen wrote a guest post on my blog about her decision to buy a Brompton. Jen followed that story with a second post about how she and her partner are enjoying their Bromptons. It was great to see Jen and Noel at the Gold Coast’s first group ride.

The beauty of inviting Brompton riders as well as their two wheel friends, meant that some cyclists were able to have their first ride of a Brompton. It was just along the footpath but it was fun.

During the ride we ventured over and along Tallebudgera Creek. Along the way we called into Parlour Cafe at West Burleigh for coffee, an afternoon snack and chat. That was all part of the planned ride. However, as we rode the beachfront foreshore on our way over to the cafe, a special this-time-of-year-only treat appeared. That’s right, we watched whales breaching offshore. Magic!

Burleigh Heads was the meeting point for the ride and that wasn’t so magic. In new ventures, mistakes become obvious quickly. This was one of them. At 1pm on a Saturday afternoon, Burleigh Heads was crazy busy and for those riders who had to drive to the event, it was near impossible to find a park. Brisbane Brompton Rider David outsmarted the traffic and parked his car at Varsity Lakes train station and pedalled over to Burleigh. Others lived close enough to ride their bikes. For future rides, we’ll aim for a meeting point where parking is easier.

Overall, for the first meet, it was a great start. And there are more rides in the making. These tiny wheels have a big heart. 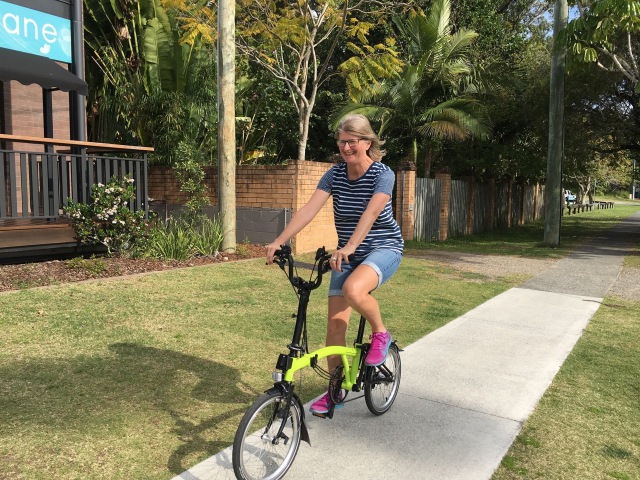 Footpath fun: Having a test ride of Jen’s Brompton.

10 Comments on “Tiny wheels with a big heart”

S U M M E R 😍
Seaside Saturday …and the sun is shining 🌞🚲🙂
A windy, rainy Friday with a some big seas to watch. 🚲🚲#ridewithaview
Welcome to Monday from Currumbin Alley 🙂🚲
Spring! 😍☀️🌸🦋🚲
To the border today… under cloudy skies.
There are tunnels up there 🚴🏻🚴🏼‍♀️🚴‍♂️ Day 2 on the BBIRT (Boyne Burnett Inland Rail Trail): Dawes Range Section with the amazing Barrimoon Tunnels within easy reach, an exhilarating downhill ride, impressive old bridges, grass trees by the thousands and views views views 😍
A glimpse of the Mt. Debateable to Mundubbera section of the BBIRT (Boyne Burnett Inland Rail Trail): Bridges, citrus orchards, the Burnett River, sandy sections, gates to open and close, grids to ride over and gullies to descend and climb. Adventuring fun! 🚴🏻🚴🏼‍♀️🚴‍♂️
Cloudy skies today 🌥
On the way back from Kingscliff.
l i f e t o d a y 🌞
Swapping pedals for flippers @ladyelliotislandecoresort