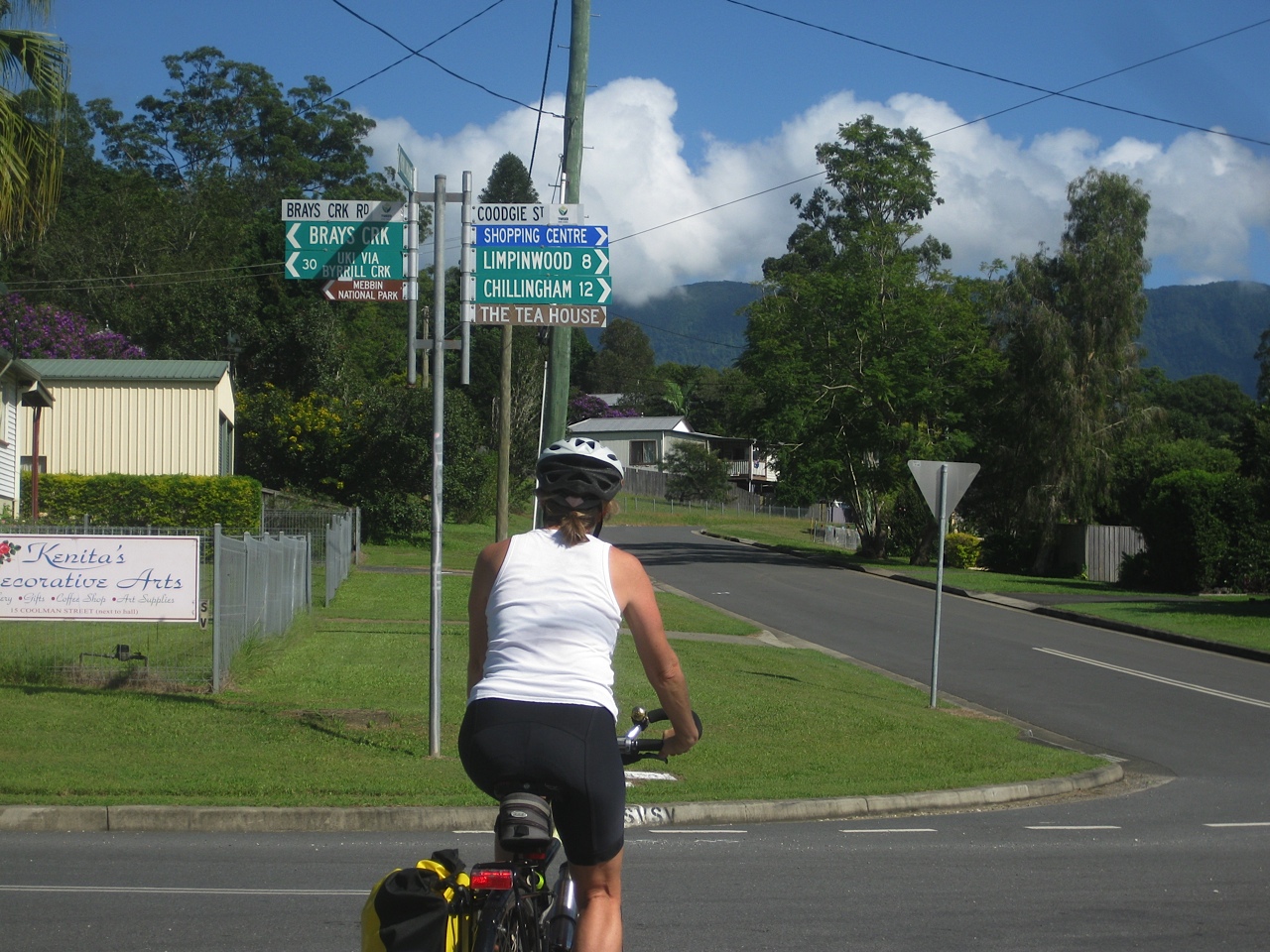 My previous post highlighted the magnificent landscape we rode through on the Wollumbin Circuit, its geological, cultural and spiritual significance. In this post you’ll read about the communities, their people and livelihoods that we encountered while riding the Wollumbin Circuit on a Good Good Friday. But first the news… (play first 20 seconds of video)..

Now for the details:

On Good Good Friday, two women left Murwillumbah travelling by bicycles, passing cows grazing and road cyclists racing. Nine kilometres later, they stopped at the turn off to the Hare Krishna village at Eungella. A single lane road descended steeply to a creek spanned by a timber bridge. The creek waters gurgled quickly generating a feeling of peace and tranquillity. In their seven minute stop to film and feel the beautiful creek, five cars left and two arrived, all scurried across the bridge, one driver was seen to wave.

The tropical fruit known as the guava is fondly remembered by many Queensland-born baby boomers. With a skidding of rubber tyres, an end-to-end bicycle crash was narrowly avoided after a bicycle rider, reported to be a Queensland-born baby boomer, saw a wild guava tree, flush with fruit, while riding downhill. Surviving the near miss, the bicycle rider wheeled back to the guava tree to feast on the sun-ripened fruit. The thick yellow skin with a pink, seeded interior delivered high doses of vitamin C, ensuring scurvy would not be an issue on this expedition.

Eyewitnesses reported two electric bikes parked outside a cafe in Tyalgum on Good Good Friday. One was a mountain bike design in matte black with a battery built into its frame and the other a white step-through with a battery mounted under its rear rack. Both are part of an initiative by the owners of the Tyalgum General Store to establish an e-bike rental and tour service in and around the village.

While e-bikes are soon to be a gogo in Tyalgum, this is only a small part of bigger plans. The Tyalgum Energy Project aims to see the village of about 300 people live completely off the grid. This would make it the first Australian town to voluntarily become 100% reliant on renewable energy. A planned re-development of the town’s historic butter factory will showcase renewable energy alternatives, acting as an educational experience for visitors and a hub for innovation within the town.

In economic news, roadside stalls reported a spike in sales on Good Good Friday. Tahitian limes, organic mandarins and passionfruit were among the highest sellers. Early indications suggest this was only a temporary rise attributed to two female bicycle riders trading gold coins for fruit in the Murwillumbah district during the day.

And finally in the arts, sources report seeing two bicycle-riders negotiating with four Tiny Horses in a field east of Chillingham. While details are still to be confirmed, it’s imagined the Tiny Horses could star in a re-interpretation of the 1960s sitcom Mister Ed the Talking Horse expected to be filmed on the Gold Coast.

And now for the weather: